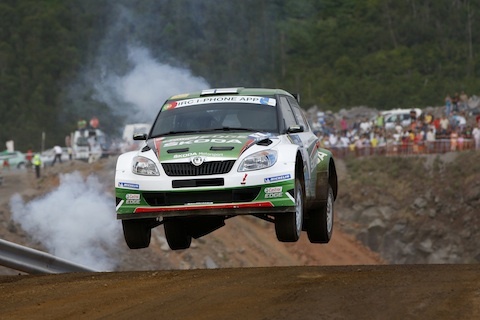 Defending Intercontinental Rally Challenge champion Juho Hänninen says he expects Andreas Mikkelsen will be his toughest opponent when he returns to the series on RACMSA Rally of Scotland.

Hänninen, who drives a Skoda Motorsport Fabia S2000, secured the 2010 IRC drivers’ crown by winning in Scotland last season and is still in contention for this year’s title, despite skipping the last two events.

On Sata Rallye Açores in July, the only gravel round to have run so far in the IRC this season, Hänninen took victory but only after a close fight with Skoda UK Motorsport driver Mikkelsen. The Finn is braced for another close battle with the Norwegian ace next week.

“I think it will be a big battle with Andreas,” said Hänninen. “In the Azores this year, we had such a big fight with him, it was incredible. I think he will be the main person, but then there are other drivers who will be close as well – [Guy] Wilks will be difficult there as well. It will be a very big fight and a really tough battle, but a great place for the fight.”
– Credit: www.ircseries.com