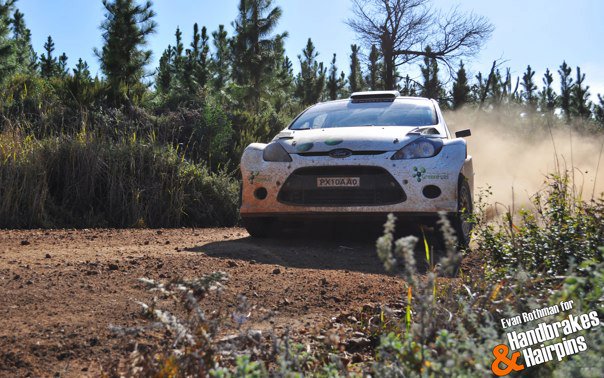 With just one round remaining in the South African Rally Championship, the Polokwane Rally in Limpopo on 22 – 23 October, the outcome of the Drivers’ and Co-Drivers’ Championships is far from settled.

With a maximum of 25pts remaining for a win in the eighth and final round, the new Polokwane Rally in Limpopo, and competitors being required to drop their worst score of the season, any one of four drivers could be crowned the champion.

Based on the current provisional points situation, which is subject to a Motorsport South Africa appeal court hearing on 11 October regarding the result of the fourth round, nine points separate the top three. Zimbabwean privateer Conrad Rautenbach, who has three wins to his credit in the Green Fuel Ford Fiesta S2000, leads with 125pts. Joint second are privateer Mark Cronje (Team Sasol Ford Fiesta S2000), who also has three wins, and defending champion Enzo Kuun in a factory BP Volkswagen Polo S2000 on 116pts. Fourth-placed Johnny Gemmell (Castrol Team Toyota Auris S2000) has 93pts and is 32 in arrears.

This situation would change if they were to drop their worst result now. There are a number of possible outcomes, all of which would have a different impact on the championship. A successful appeal could benefit Gemmell or Rautenbach or both.

Cronje, with a non-finish in the opening round, would lead with 116 points from Rautenbach (110pts after dropping 15) and Kuun (107 after dropping nine). Gemmell, second in last year’s championship, would then come into the reckoning. He would remain on 93pts and close to within 23pts of Cronje as he was a non-finisher in the last round.

It’s a little different in the Co-Driver’s Championship, where Rautenbach’s French co-driver Nicolas Klinger doesn’t score as he is not competing on a South African license. The race is between the top three, who are separated by 23pts.

Defending Champion Guy Hodgson, who reads the route notes for Kuun, is first with 124pts before the deduction of his worst score. Cronje’s co-driver Robin Houghton is second with 119pts and Gemmell’s Scottish co-driver Drew Sturrock is third with 96pts.

Applying the dropped score rule, Houghton takes over the lead with 119pts (his worst result was a non-finish) from Hodgson with 114pts (he drops 10) and Sturrock with 96 (he drops a non-finish).

The Two Wheel Drive Championship, for Super 1600 and Super 1400 cars, is a straight fight between the Sabertek Volkswagen Polo S1600 of brother and sister Christoff and Celeste Snyders and the Team Total Toyota RunX S1600 of former Class champions Craig Trott and co-driver Robbie Coetzee. The Snyders’ have won three rounds to date and accumulated 128pts and 130pts respectively, giving Christoff a 10-point lead over Trott and Celeste a 12-point lead over Coetzee.

Kes Naidoo, who reads the route notes for Conradie, is third in the Co-Drivers’ Championship with 86pts, 44 behind Celeste Snyders. Haigh-Smith’s British co-driver James Aldridge is ineligible for points.

Megan Verlaque, who leads the S1400 Class with three wins to date in a factory BP Volkswagen Polo S1400, is sixth overall in the Two Wheel Drive Championship, with 63pts. Second in S1400 with 9pts is Henk Lategan (Q8 Oils Volkswagen Polo S1400), who has two Class wins to his credit so far.

In the hotly-contested manufacturers’ championship it’s a two-horse race between current leaders Toyota on 779pts and Volkswagen on 725pts as the prestigious title chase heads down to the wire. Toyota is seeking a record 14th consecutive championship dating back to 1998. Ford is third with 658pts.

The final round of the SA Rally Championship is the new Polokwane Rally in Limpopo on October 22 and 23.
– Credit: www.sarallying.co.za