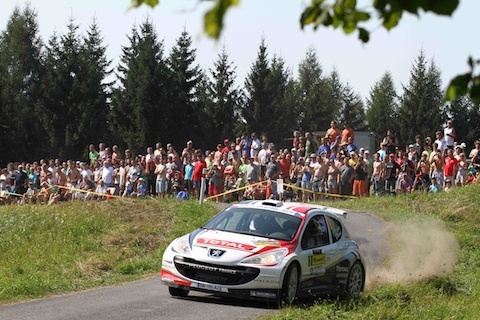 The all-action Intercontinental Rally Challenge (IRC) is back on gravel for the third running of RACMSA Rally of Scotland this weekend with six drivers still locked in combat for the coveted title.

With live coverage on Eurosport and extra points offer to the top 10 eligible finishers, the event is set to emulate the high drama and thrilling battles witnessed on several rounds of the IRC this season. Such has been the close nature of the competition in 2011 that the winning margin on four events has been less than two seconds. Scotland’s IRC qualifier is set to be no different.

Rally of Scotland’s stages are some of the fastest and most spectacular on the calendar. Winding their way through the picturesque Perthshire and Stirlingshire countryside in the centre of the country, the stages use mainly closed-forest roads with blind crests, climbs and descents, sharp drops, tight junctions, off-camber corners and tree-lined straights all in store for the bulging entry.

The event gets underway with two runs through the Carron Valley stage on Friday night following the ceremonial start at Stirling Castle. Carron Valley, which measures 8.36km in length, uses forest roads around Carron Reservoir close to Stirling and will provide an early test for the IRC crews, who will tackle the stage in the dark.

The county of Stirlingshire will host Sunday’s action. Following a third visit to Carron Valley, competitors will tackle two runs of the Loch Chon and High Corrie stages, which include sections of the old Loch Ard test, before the event draws to a close at Scone Palace where two short stages will be held prior to the ceremonial finish. Scone Palace, on the outskirts of Perth, is where kings of Scotland were crowned in centuries past.

On both days the permanent service park will be housed at Perth Airport although a remote service will be available in the town of Callander on Sunday to reduce the total liaison distance for the competitors while providing welcome respite following the first 25.81km High Corrie test.

In addition to forming the penultimate round of the main IRC, Rally of Scotland counts for the new-for-2011 IRC Production Cup for R4 and Group N-specification four-wheel-drive machines, plus the IRC 2WD Cup for 2WD cars.

An entry full of quality and quantity has been assembled for RACMSA Rally of Scotland’s third appearance in the IRC with five of the six title contenders set to fight for glory against a number of talents from the British Isles.

In a pre-event interview, Juho Hanninen (Skoda Motorsport Fabia S2000), said: “Scotland is one of the best rallies we do. I love the way the stages flow over the crests, you carry good speed and the surface is always fine. It’s a big challenge and it will be a very big fight for victory, but it’s a great place for the fight.”

Alister McRae (Proton Motorsports Satria Neo S2000): “I have good memories of rallying in this part of the world. We had a good finish here a couple of years ago, when we finished second in the PROTON. The competition is going to be really tough, there’s a good, quality entry.”

Guy Wilks (Peugeot UK 207 S2000) commented to the media: “It’s a fantastic feeling to win and when it’s your home rally it’s even better. It will be no easy challenge because there are so many Super 2000 cars competing. But the best way to win is to beat the best. I’m only looking at one thing, to win.”