Pierre Campana’s rally career reached new heights at the World Rally Championship event in France at the beginning of this month when he claimed his debut WRC points with a spectacular ninth place finish.

The 26-year-old Corsican is now determined to use this sublime result to boost his career yet further and is out to impress in this weekend’s French Rally Championship event, Rallye Cévennes, with victory a realistic target.

Campana has had one of the busiest periods in his short career with two WRC participations with the Drive-Pro team, driving the MINI John Cooper Works WRC car in Rallye Deutschland and Rallye de France-Alsace, as well as a one-off appearance in Mont Blanc.

With the support of the FFSA, who have made Pierre the star of their Rally Team France initiative for 2011, the Campana name is becoming well established in the rallying world and another competitive performance with the MINI this weekend would cement this even further.

The Drive-Pro team continues to offer their high level of support with Team Owner, François Padrona, full of praise for Campana’s performances this year. For Pierre, the journey continues and Cévennes offers another chance for glory alongside his co-driver Sabrina de Castelli.

Pierre Campana said: “I am really looking forward to getting back in the MINI for this weekend’s Rallye Cévennes. It is an event I am very familiar with since I won two years in a row there in 2008 and 2009 in a junior category. The WRC Rallye de France-Alsace seems like such a long time ago, although the result is still fresh in my mind and I hope to use this positive momentum that we have built up recently to good effect this weekend. There is some tough competition in the French Rally Championship but I would like to aim for a solid result in the top three and fight for the overall win. For Sabrina and I to have had the chance to work with Drive-Pro and drive the MINI in this second part of 2011 has been incredible and we are learning all the time but I think we are on the verge of great things for the future. Another good result at Cévennes this weekend will be another important milestone on this great journey. Again, I can’t thank enough Drive-Pro for their support this year as well as Prodrive who have given such fantastic help.” 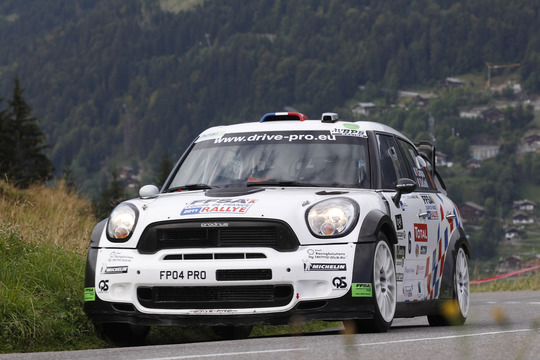