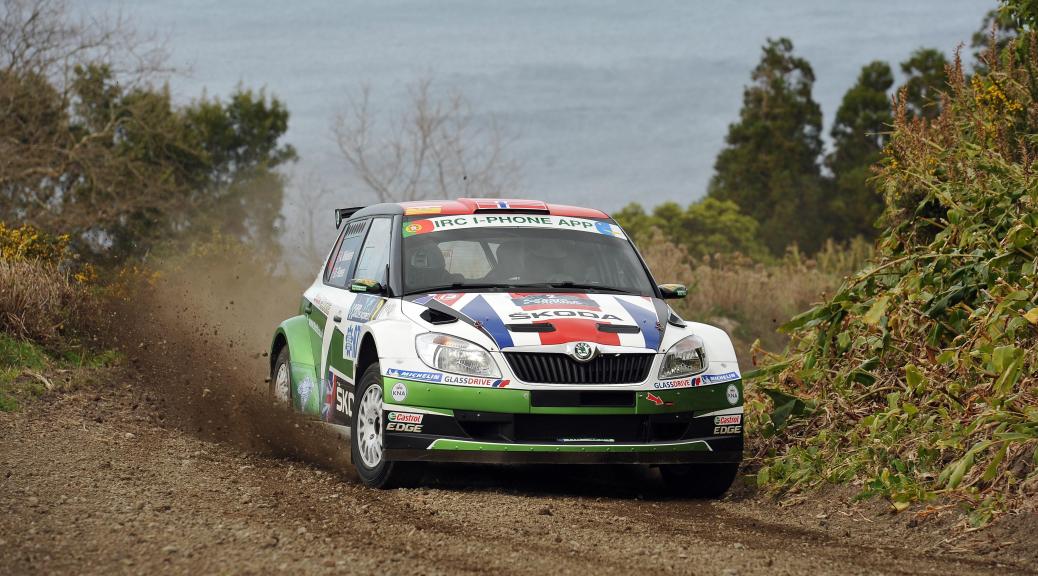 Andreas Mikkelsen began the defence of his Intercontinental Rally Challenge (IRC) title in perfect style by confirming a start-to-finish victory in the 47th SATA Rally Azores in Ponta Delgada on Saturday.

Mikkelsen and fellow Norwegian co-driver Ola Fløene fended off a determined challenge from last year’s event winner Juho Hänninen to seal victory in their Škoda Fabia S2000 by the margin of 25.1 seconds after 13 timed special stages, held over three days, on the Azorean island of São Miguel.

“It’s a perfect start to the season for Skoda UK and I am delighted for the whole team,” said Mikkelsen, who clinched a third successive IRC win since Scotland last year and won 10 of the 13 timed tests. “It has been a big fight. Juho kept me on my toes all the way.”

The French duo of Bryan Bouffier and Xavier Panseri were never able to match the pair of flying Škodas, but the Peugeot France-backed crew finished a comfortable third overall in their 207 S2000. “I have learned a lot in a really positive way and a podium is not so bad,” said Bouffier.

Sepp Wiegand and Hermann Gassner Jr. resumed their frantic tussle for fourth and fifth overall on day three. An engine stall had pushed Wiegand behind his rival on Friday afternoon and Gassner returned the favour on the first stage of day three, as fractions of a second separated the German Škoda duo.

A crucial soft compound tyre choice gave Wiegand the advantage in the 11th stage and the youngster held on to take fourth place by 1m 03.6s, once Gassner swiped the rear end of his Fabia in the penultimate stage and collected a slow puncture.

“Unbelievable for me,” said a delighted Wiegand. “It was my first second rally on gravel and my first in IRC. It was a great fight with Hermann. We had the upper hand today. I am really happy.”

“I thought I could fight for fourth place, but I made that mistake in the second last stage and that was the end of that,” said Gassner. “It was not my best rally I suppose.”

Azorean driver Ricardo Moura controlled the IRC Production Cup or Group N category from start-to-finish in his Mitsubishi Lancer Evolution IX and finished an excellent sixth overall into the bargain. “This was really as high as I could go with the opposition above me in faster cars,” admitted Moura.

Ukrainian Oleksandr Salyuk was classified in seventh with his M-Sport Ford Fiesta S2000 and the Portuguese trio of Sergio Silva, Ruben Rodrigues and Miguel Barbosa rounded off the top 10.

Local driver Paulo Maciel finished 12th and dominated the two-wheel drive category in his Citroën Saxo, once Britain’s Harry Hunt had blotted his copybook on day two with a broken radiator.

Day 3 – as it happened:
Mikkelsen began the final five stages with a 16.2s lead once an earlier computer error – that displayed the Norwegian leading by 14.8s – had been corrected. Twenty-four of the original 39 entrants started the final day.

Overall positions for the top five were reversed for the starting order and Wiegand found himself first on the road for a second successive day in the 19.60km Graminhais stage, where sunshine was a welcome change to the fog and rain of the previous 24 hours.

When Gassner stalled at a tight hairpin, Wiegand moved back up to fourth position by the margin of just 1.4s. Mikkelsen won the stage by 1.7s to extend his advantage over Hänninen to 17.9s.

“These conditions are perfect. It was such a pleasure to drive,” said Mikkelsen. “We just need to keep on what we are doing. It is easy when you relax to make a mistake.”

A top time through the 22.02km Tronqueira stage was crucial if Hänninen was to make in-roads into Mikklesen’s lead. But it was not to be and the Norwegian, who was noticeably enjoying his morning’s rallying, extended his advantage by 5.2s to 23.1s.

Gassner chose a harder compound tyre on the slippery surface and dropped 8.2s to Wiegand, who chose a favourable softer compound rubber. It was a crucial decision and strengthened Wiegand’s hold on fourth place, behind Bouffier, to 9.6s. Moura maintained sixth and the lead in the Group N category. Frenchman Robert Consani and Portugal’s Ivo Nogueira and Pedro Rodrigues retired.

Mikkelsen admitted the second pass through the 2.2km super special stage was more slippery than the previous day, but the Norwegian extended his lead by another 0.9s and reached the midday service in Ponta Delgada with an advantage of 24 seconds. “I will still push and try and catch,” admitted Hänninen. Wiegand pipped Gassner by a tenth of a second to increase his hold on fourth to 9.7s.

The second run through Graminhais began in cloudier conditions. Wiegand missed his braking point at one stage and had lost vital seconds to Gassner at the split, but the German swiped the rear end of the car soon after and finished the stage with a slow puncture, enabling Wiegand to extend his hold on fourth to a commanding 48.6s.

A resigned Hänninen reached the stage finish 3.4s behind Mikkelsen, who duly took a 27.4 lead into the final 22.02km of the Tronqueira special. “It was a bit rougher in there than I expected,” said the leader. “A clean drive. Now just one tricky stage to go, which is very narrow.” Portugal’s Rui Lousado retired his Subaru Impreza from 11th overall with mechanical troubles.

Hänninen actually pipped the Norwegian through the final special, but Mikkelsen was not to be denied and he reached the finish with a winning margin of 25.1s, as the top six all held station.