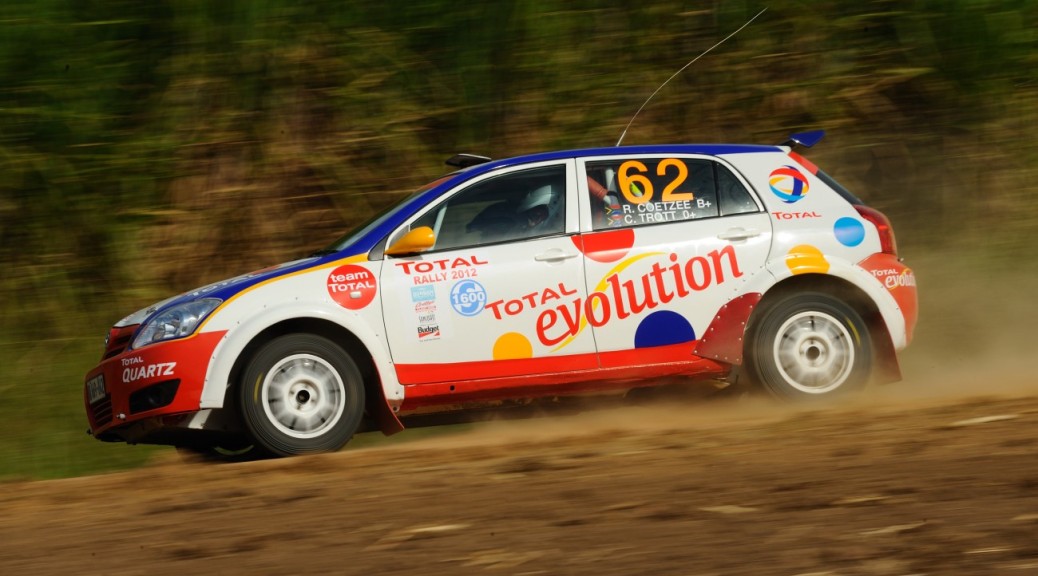 The Challenge:
Dust clouds, cheering fans and the treacherously slippery gravel roads of KwaZulu-Natal’s central and south coast sugar cane fields characterised the 54th edition of the season-opening Total Rally. The thousands of spectators who lined the gravel roads over the two days of action were rewarded with action aplenty and high-speed thrills as befitting a series as competitive as the South African Rally Championship.

Contested by 32 crews in this the first round the 2012 South African Rally Championship, this event comprised of 16 stages over 196km of timed rallying. For this year the event organisers, the Natal Motorcycle and Car Club (NMCC) and Total South Africa, brought the sport to the people of Durban with a spectacular Super Special Stage run in the area around the Moses Mabhida Stadium. The Super Special Stages was run on Friday night and repeated on Saturday afternoon as the event’s grand finale in front of thousands of excited fans.

The fight for the rally win was very much a three-way battle, but mechanical maladies, driver errors and punctures saw this enticing fight come to a premature end. Cronje was left to spar with Gemmell for the victory, and the Ford driver determinedly to outpaced Gemmell on the final two speed tests of the event. Interestingly, the all-new Volkswagen Polo S2000s of Enzo Kuun/Guy Hodgson, Hergen Fekken/Pierre Arries and Hans Weijs jnr/Bjorn Degandt made a successful debut in the South African Rally Championship to push their Ford and Toyota rivals throughout the weekend.

J-P. Damseaux/Grant Martin (car number #10) were fighting for third place overall for much of Day Two’s action, but a snapped sideshaft coupled with a puncture in stage ten cost the team over a minute to their rivals and this dropped them down the leader board. Damseaux fought bravely in the afternoon’s stages in a bid to regain the lost time, and ended the rally in an impressive seventh place overall.

Mohammed Moosa/Andre Vermeulen (car number #13) persevered on Day Two of the Total Rally to fight their way up the standings from their overnight 16th place position after Moosa suffered from mechanical gremlins in his Auris S2000. Moosa set threateningly fast stage times on his way back up the leader board, and after Day Two’s ten stages he ended eighth position overall.

Stefanie Botha/Angela Shields (car number #74) sadly rolled out of the Total Rally in stage five on Day One. The crew was uninjured in the crash, but the damage to their Toyota RunX S1600 meant they were unable to continue in the event.

Craig Trott/Robbie Coetzee (car number #62) found themselves on the top step of the Class S1600 and Two Wheel Drive Championship leader boards in the season-opening rally. With a consistent and confident performance on each of the event’s 16 stages, Trott and Coetzee proudly collected the winners’ trophies for their sponsors Total South Africa and Team Total after a trouble-free weekend in which the pairing never put a wheel wrong. Opening their Championship with a win, Trott and Coetzee are favourites to once again claim the Class S1600 Drivers’ and Co-Drivers’ Championship titles come the end of the eight-event 2012 season.

Next On The Calendar:
Team Total will next tackle the forest gravel roads surrounding Sabie, Nelspruit and White River for the Sasol Rally taking place on 20 and 21 April.