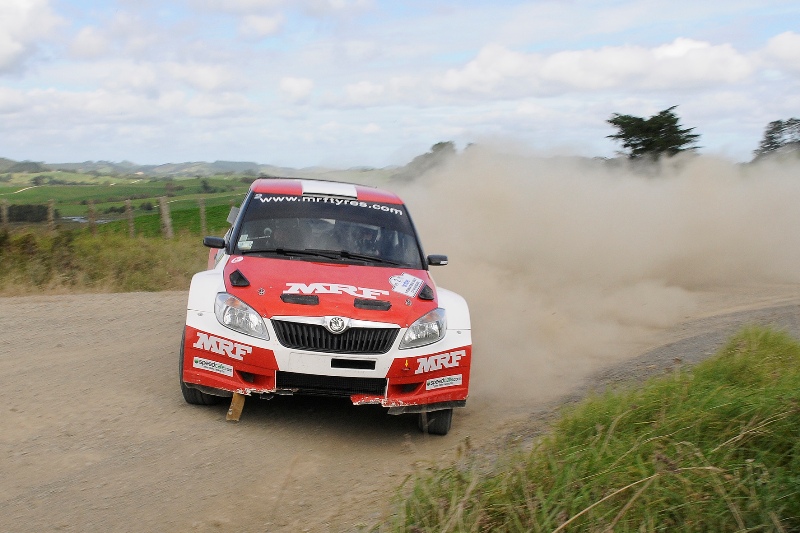 Atkinson, an Australian, piloted a Skoda Fabia S2000 car in his and the car’s first event with Team MRF from India. Last year Atkinson won the event in a Proton Satria Neo S2000 car – the car now driven by Andersson.

First competitor home for the Brian Green Property Group New Zealand Rally Championship powered by Brother was Coromandel’s Alex Kelsey in his open four-wheel-drive category Subaru. After yesterday’s strong run, Dunedin’s Emma Gilmour’s hopes unravelled this morning with a puncture and a series of issues getting the wheel changed. Gilmour fought back through the afternoon stages, but a strong, consistent run from fellow NZRC Group N 4WD competitor Matt Jansen, from Christchurch, saw Jansen take second in NZRC with Gilmour having to settle for third.

Of his overall and APRC victory, Atkinson said: “It’s been a great weekend. The team have been amazing. The car, the tyres, everything worked really well. It was always going to be tough being up against the factory Proton team. The MRF team came along with a brand new car and straight out of the box we were on the pace and were able to control the rally, which is great. I was just driving to beat PG – that is all I was worried about, the APRC points, and while we could have gone a bit faster in places but we were trying to judge our speed and not try doing anything we didn’t have to.”

Swedish driver P-G Andersson has rallied on some of the roads used in this event when they were part of Rally New Zealand, but this was his first run in the Whangarei event. The Proton driver said: “Chris has done a great job today after being first on the road, to have the pace he has. We’ve been trying to catch up as much as we could but we couldn’t do it just by driving – he had to make a mistake, have a puncture or something else. We were trying to keep the pressure on and enjoy those roads best I could – it was great fun. There are some issues we have to clarify but we’ve moved forward with the car and I think we will be stronger for the next rally. But we have really enjoyed it.”

At 19 years of age, Alex Kelsey is the youngest-ever winner of a NZRC round in its 37-year history.

“I can’t believe it!” said Kelsey. “It’s fantastic! I mean, to come here and to think that we’d be winning after two days, just to finish was all we wanted so, absolutely incredible. Perfect. We had a slow puncture this afternoon but we changed that and it’s been sweet.”

Gilmour was philosophical about today’s challenges. “We had a good afternoon, pretty smooth and pretty uneventful.”

New to the NZRC this year is the power stage – this was the final stage of the event, the 21.19 km Waipu Caves. First-ever power stage honours went to Christchurch’s Chris West who restarted today after withdrawing temporarily yesterday with drive-train issues. West and his Mitsubishi won five of today’s eight stages, demonstrating his pace against the WRC-based experience of P-G Andersson, who won the other three tests. Meanwhile defending NZRC champion Richard Mason, from Masterton, also had to restart today. Despite being the third-quickest across Sunday’s eight stages, neither Mason or West are counted for the overall event results due to the previous day’s withdrawals.

The Brother International Rally of Whangarei covered 283.28 kilometres over roads around Whangarei and through the Northland and Kaipara regions. The two-day rally counted as the opening round of the 2012 FIA Asia Pacific Rally Championship (APRC) and Brian Green Property Group New Zealand Rally Championship (NZRC), powered by Brother. The event attracted nearly 50 drivers from India, Japan, Malaysia, Australia, Sweden, United Kingdom, and New Caledonia as well as all over New Zealand. Fifteen competitors ran a one-day event as part of the Top Half Rally Series, with victory going to Auckland’s Dylan Turner.
More detail and latest event news is available on the website http://www.rallywhangarei.co.nz.
ENDS/

NB. As an NZRC open 4WD competitor Alex Kelsey ran in the Clubman’s field, not in the international event with results listed above. However the overall times place Kelsey first in the NZRC standings.