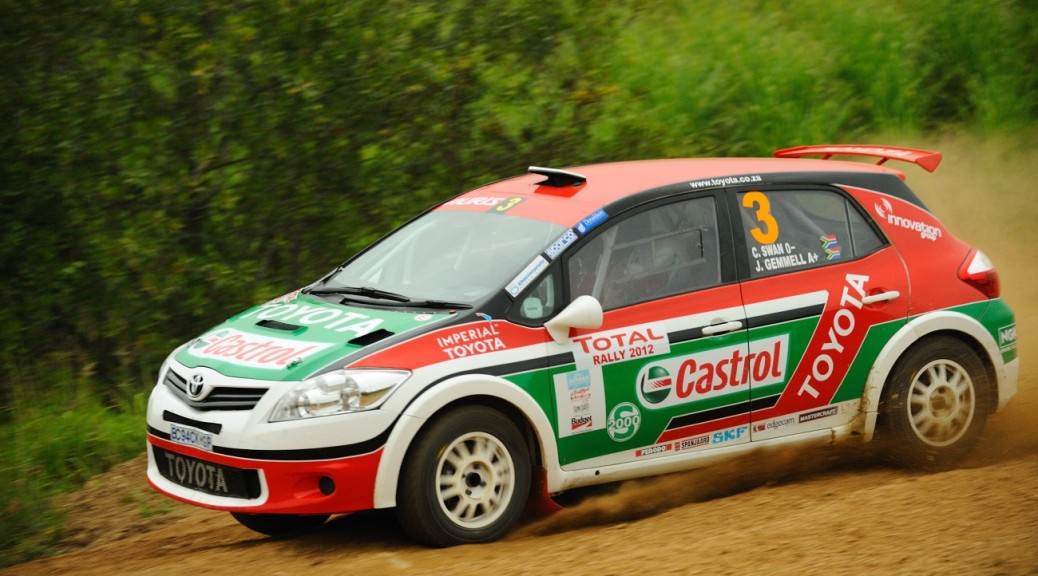 The 2012 South African National Rally Championship got off to a fast start in KwaZulu-Natal last weekend with a closely-contested Total Rally that attracted thousands of spectators at the many vantage points along the 16-stage route.

Good entries in each of the two classes, S2000 for 2.0 litre four-wheel drive cars and S1600 for 1.6 litre two-wheel drive cars, featured a number of new cars and driver/co-driver combinations. The Rally Commission of Motorsport South Africa added further spice to the event by introducing a number of fresh innovations in its drive to popularise the sport both with competitors and South African sport enthusiasts.

These included a short qualifying special stage on the tarmac surface of a parking area near the Moses Mabhida Stadium on Friday, which was watched by an appreciative crowd of rally enthusiasts. The result of this spectacular gymkhana-type stage, with competitors negotiating a tight route demarcated by menacing barriers, determined the start order for the rally proper later in the day.

The top 10 seeded drivers then chose their preferred start positions, with the winners, Enzo Kuun and Guy Hodgson in a factory BP Volkswagen Polo, opting for number 10 to avoid having to ‘sweep’ the loose and slippery gravel surface of the stages that followed.

Sponsors Total pulled out all the stops to make the event more memorable with a high profile marketing and promotions campaign and were rewarded with large numbers of enthusiastic spectators who were drawn to the well identified spectator points along the route on both Friday and Saturday.

The tarmac spectator stage in Durban, a longer version of the qualifying stage, saw packed grandstands on both Friday night, when it concluded the first day’s action and the final stage on Saturday afternoon.

The S2000 Ford Fiestas, which won five of last year’s seven rounds, were again dominant, winning 11 of the 16 stages. Mark Cronje and Robin Houghton (Sasol Ford) won eight stages on their way to victory, while third-placed Charl Wilken and Greg Godrich (Basil Read Ford) won two and new team-mates Jan Habig and Robert Paisley won one on their way to a credible fourth place in their debut appearance in the Basil Read Ford.

“We’re very happy with the weekend’s event,” said Rally Commission president Richard Leeke. “It augurs well for a successful season ahead. We enjoyed great support from competitors and the public, as well as the event sponsor Total, who has supported this popular KwaZulu-Natal rally for many years.

“The qualifying stage innovation was a bonus for the fans and worked well. Traditionally the starting order for the rally is based on driver seeding, which means the top-seeded driver has the disadvantage of starting first on the road and having to ‘sweep’ the route for the following competitors.”