As the FIA WRC Academy crews tackled the most challenging event of their careers at the 58th Acropolis Rally this weekend, it was Elfyn Evans (23) who came out on top to claim his maiden WRC Academy victory with a dominating seven out of a possible ten stage wins. The Welshman is known for his speed and mechanical sympathy – a mix which proved advantageous on the abrasive Greek stages. Alastair Fisher (23) claimed second place to maintain his lead at the head of the standings with Brendan Reeves (23) securing his second podium of the year finishing the event in third.

Supported by Ford Racing in Europe and with control tyres from Pirelli, the WRC Academy got underway with a 25km stage on Thursday evening with rookie Pontus Tidemand (21) setting the pace to take an early lead – 3.9 seconds up on Evans with Fisher a further 4.1 adrift in third.

Elsewhere however, the opening test spelled disaster for Sweden’s Fredrik Åhlin (21). Keen to translate his speed into a strong result on the Acropolis Rally, the youngster slid off the road after being distracted by an engine light following a heavy landing which damaged the sump on his Ford Fiesta R2. Åhlin’s mature approach saw him take advantage of the Rally 2 regulation rather than continuing and risking any further damage to his Fiesta.

The competition restarted on Friday morning with the WRC Academy crews contesting six stages including Greek classics, ‘Bauxites’ and ‘Drossohori’. The remote service in Itea posed a new challenge for the competitors – having to complete all six stages with only the spares in the rally car available for repairs. Thanks to his speed and mechanical sympathy, Evans dominated the day with a clean-sweep of stage victories that saw the Welshman assume control at the head of the standings.

With a good run over Elikonas 1 (SS4), Fisher got the better of Tidemand in their battle for second, leading the Swede by five seconds going into service. Unfortunately, having been going strongly in seventh, Dutch Federation (KNAF) supported driver Timo Van Der Marel (22) clipped a rock on SS4 which damaged the front wishbone on his Fiesta R2 forcing him to Rally 2 the following day.

Evans’ dominance continued over the afternoon to lead the series by 29.5 seconds at the end of Day 1. Getting to grips with the art of loose-surface rallying, asphalt specialist Jose Suárez (20) claimed the third fastest time over Bauxites 1 (SS5) to climb to fifth place in the overall standings – just 27.1 seconds adrift of Reeves going strongly in fourth.

Re-starting on Saturday morning, the crews contested four stages through the beautiful Peloponnese peninsula which masked the roughest day of competition in this year’s World Rally Championship (WRC). The going was tough, and the abrasive nature of the stages – littered with rocks and exposed bedrock – claimed a number of victims.

Amongst the unfortunate, and heart-achingly close to his second consecutive WRC Academy podium, Tidemand broke a driveshaft 5km into SS11. Also falling foul of the stages’ rough characteristics, fellow Swede Åhlin rolled his Fiesta on SS12 – forcing an untimely retirement after demonstrating some impressive speed over the morning’s opening stages.

The same stage saw heartache for Ashley Haigh-Smith (19) with a broken driveshaft on his debut as an official WRC Academy driver and there was further disappointment for João Silva. Having shown clear progression by setting the fourth fastest time over SS11, an impact to the exhaust saw the Portuguese driver damage the fuel tank of his Fiesta R2.

Elsewhere however, Evans claimed a further two stage victories to secure his maiden WRC Academy victory. Despite rolling his Fiesta R2 and losing over a minute on SS12, Fisher recovered well – with a broken windscreen – to secure second place and maintain his lead at the head of the series while a mature drive from Reeves saw the Australian stay clear of trouble to secure his second WRC Academy podium of the year in third.

Battling throughout the weekend, John MacCrone (23) pipped Suárez in a nail-biting battle for fourth place. The closing stages saw both drivers snatch a stage win – which marked the first WRC Academy stage victory for the Scotsman and Suárez’s first on gravel – but it was MacCrone who came out on top by a margin of just 6.8 seconds. Claiming his first WRC Academy points, American Chris Duplessis (24) brought his Fiesta R2 safely home in sixth, with Van Der Marel recovering from yesterday’s issues to claim the final points in seventh. 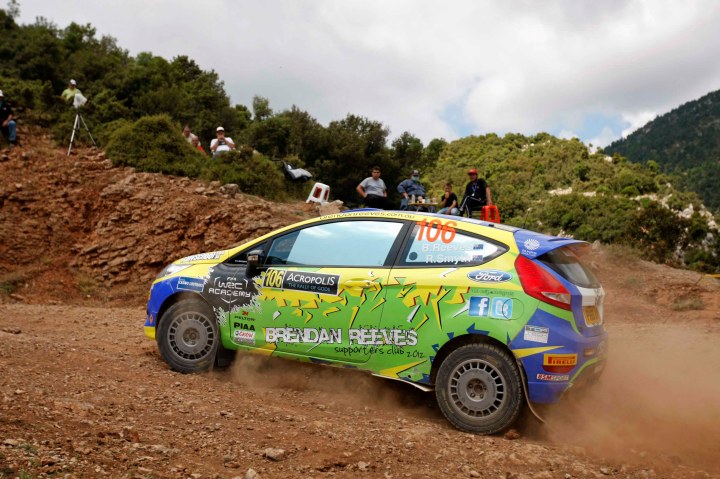 With seven out of eleven Fiesta R2s making it to the end of the roughest event on the WRC calendar, the WRC Academy crews, and Ford Fiesta R2, impressed once again – raising to the challenges posed by the demanding terrain.

With four events remaining, the WRC Academy championship standings are closer than ever. Fisher’s second place saw him maintain his series lead with just an eight point advantage to Evans in second. Reeves lays a further three points adrift in third with Suárez fourth and Van Der Marel and Tidemand rounding off the top six.

Elfyn Evans (1st) said: “I am very happy and this event is definitely up there as one of my best results. It has been a difficult event and SS11 was probably the toughest stage I have ever driven but the Fiesta [R2] and Pirelli tyres have done fantastically well. It was very rough in places and we didn’t have a single puncture. If you saw the conditions I don’t think you would believe that they would be able to cope, so it is a real credit to Pirelli.

“We had a really tough rally in Portugal so put a lot of work into preparing for Greece and everything has gone really well. Phil [Pugh] has been world class and I am very lucky to have him in the car.”

Alastair Fisher (2nd) said: “We are very happy to finish second having been upside down! It was an enjoyable rally. The plan from the start was to get a podium so we achieved that and have scored some good points for the Championship. We rolled on SS11 on a very slow corner when the wheel got caught in a rut, so we were very lucky that we were able to maintain our position – it was tricky having to drive the last stages with a broken windscreen!”

Brendan Reeves (3rd) said: “We are happy to have finished with our second podium of the season. Last year we didn’t get a podium at all and this year we have two after two events and we have collected some important points for the Championship.

“Overall the rally has been enjoyable but challenging. We have had some highs and lows, yesterday had some great stages and today it was just about getting through. Rhianon [Smyth] did a great job for our 50th event together and a podium finish was a nice way to celebrate that.”

John MacCrone (4th) said: “It feels good to have taken a stage win today. Jose [Suárez] was putting some pressure on us so we had to push for fourth position. It was really fun to push a bit more, especially on the fast stages this afternoon. I am committing to my notes and they were working well. If someone had told me we would finish fourth in the toughest event on the [WRC] Academy calendar I would happily have taken it and here we are!”

Jose Suárez (5th) said: “We are very very happy. Of course I would have preferred to finish fourth, but we are pleased with our times and we had no problems with the car. I am not sure what has changed since the last event, but everything seems to be working well for us.”

Chris Duplessis (6th) said: “Today was awesome and the Dirt Fish Fiesta [R2] was amazing. The M-Sport [WRC] Academy guys and Pirelli have put a great package together and we have done some of the roughest stages I have seen with no issues.

“We opened it up a bit this afternoon and will hopefully get more consistent, fast times in the future. It felt easy to go at that pace and also good to set some quick times. We had a blast!”

Timo Van Der Marel (7th) said: “It has been a very difficult rally for us. Luck has been a real factor in this rally and not so much on our side. We had some problems yesterday and had to Rally 2, but we made it through safely today and got some important points for the Championship.”

Pontus Tidemand (DNF) said: “We started really well. We had a really good pace and made no mistakes. We should have got some really good points here, but the broken driveshaft means that we leave with only the one stage point from Thursday.

“Of course I am very disappointed, but we will concentrate on Finland now where we should be strong and have a good chance of victory.”

Ashley Haigh-Smith (DNF) said: “The event was brilliant. Ok the no score is not what we wanted, but considering how difficult this rally is we can’t be too disappointed with our performance. I was gaining confidence with every stage and the notes were working really well. Our M-Sport mechanics were fantastic and now I am really looking forward to Finland.”

Fredrik Åhlin (DNF) said: “This has not been our weekend for sure. We had a mechanical problem on the first stage, and then today I made a mistake on the road. We have had so much bad luck this year and it almost feels as though it is just not meant to be.

“But we have Finland next which will hopefully be my event. The stages should really suit me and we will be out for the win.”

João Silva (DNF) said: “I enjoyed the rally and you can see that our pace has improved since Portugal. We said that we wanted to be in the mid-field for this event and we have achieved that which is a positive. It was unfortunate that we had to retire, but this was a rough event and I was pleased with the car and our pace.”
– Credit: WRC Academy/M-Sport.