Contesting Round Four of the Rally America series this past weekend in Pennsylvania, Canadian driver Antoine L’Estage and his co-driver Nathalie Richard claimed another victory, confirming their domination of the North American Rally Championship just one week after their last win in Canada.

“This is a huge victory for the Rockstar Energy Drink team, especially right after winning last weekend out west at the Rocky Mountain Rally,” said L’Estage. “We already accomplished this same back-to-back win in 2010 – just taking part in both events with the same car is something pretty special when you consider the time it takes to cross the continent and the logistical challenges involved. Winning both is especially sweet and I’m really so proud of the entire team.”

The Susquehannock Trail Performance Rally (STPR), taking place in Wellsboro, Pennsylvania, is known as one of the most difficult in the Rally America series with fast, crowned, tree-lined roads. Leading during the first competitive stages, L’Estage and Richard eventually finished the first day in second place before re-taking the lead early on Saturday as they headed to victory.

“We didn’t have an easy first leg because even though we were leading, our engine was overheating and we had to slow down,” said Richard. “Luckily, John Buffum and our mechanics performed a minor overnight miracle when a replacement engine arrived from Vermont at 1am and the guys were able to put it in the car before we needed to start the second leg.”

Despite this new less powerful motor, the Rockstar Energy Drink duo was not only able to continue the event but they reclaimed first place and won the rally. This victory allows Antoine L’Estage and Nathalie Richard to increase their lead in the North American Rally Cup and climb to second place in the Rally America series.
– Credit: Photography to Neil McDaid. 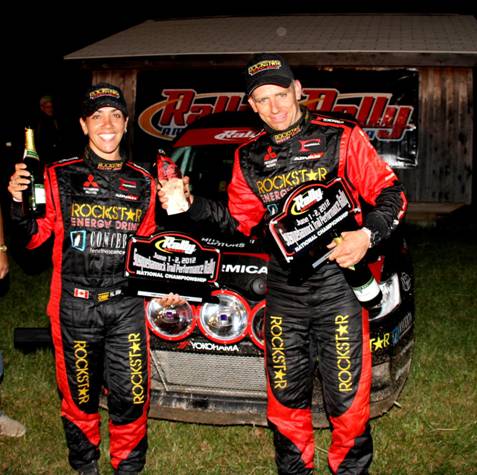