Juho Hänninen has underlined his status as the most successful driver in the six-year history of the Intercontinental Rally Challenge by winning the Geko Ypres Rally in Belgium on Saturday, the first Finn to do so since the late Henri Toivonen in 1984.

Driving a Skoda Motorsport Fabia Super 2000, Hänninen led from Friday’s second stage to make it 10 IRC wins from 28 starts, three more than Freddy Loix, the next most successful driver who settled for the runner-up place on the asphalt showcase, round six of the 13-event all-action series.

Hänninen’s victory means Skoda has won more IRC rounds than any other manufacturer with 24 triumphs to Peugeot’s 23 (subject to confirmation).

In the battle for the IRC drivers’ crown, Andreas Mikkelsen was unable to add to his points total after skating off the road on Saturday’s first stage and retiring when he damaged the suspension on his Skoda UK entry. However, with closest rival Jan Kopecký contesting a clashing Czech championship round Mikkelsen’s six-point advantage remains intact.

Elsewhere, Andreas Aigner has moved to the top of the IRC Production Cup standings with his second successive win for Subaru. Martin Kangur, in a Honda Civic Type R, clinched the IRC 2WD Cup laurels to move joint top with Harry Hunt in the race for the two-wheel-drive crown.

“It was one of the most important victories I have ever had,” said Hänninen, whose performance earned him the prestigious Colin McRae IRC Flat Out Trophy presented in honour of the rallying great. “Before the start I didn’t think it was possible to beat Freddy on his home rally but in the end we did and that was fantastic. The set-up of the car was perfect, we didn’t have to change anything.”

Loix ultimately fell short in his bid to make it eight IRC wins in his 2C Competition-prepared Peugeot 207 S2000, despite claiming five fastest stage times. Although he possesses considerable knowledge of the narrow farmland roads around the historic market town of Ypres, the 41-year-old suggested his car’s inferior top speed compared to the Fabia would always hold him back in his pursuit of glory.

Multiple Belgian champion Pieter Tsjoen completed the podium for his country’s Skoda importer on a rare start in a Super 2000 car. He is now within touching distance of a record eighth Belgian title. Polish driver Michal Sołowow finished fourth in a Peugeot with Patrik Flodin completing the top five for Petter Solberg Engineering, having been delayed on Saturday morning by a broken driveshaft.

Mathias Viaene fought back to sixth place having dropped to 18th when he punctured a front-right tyre going off the road and into a ditch on stage eight. Jonas Langenakens, who won the IRC Production Cup in Ypres last season, stepped up to Super 2000 competition in style by finishing seventh having been slowed in the early stages by a damaged exhaust.

ŠKODA Ireland’s Robert Barrable retired from sixth with a loss of gearbox oil at the completion of stage 14. Dream Team Ukraine’s Oleksandr Saliuk dropped out of fifth place when he slid into a ditch on stage 13 and got stuck for several minutes. He retired his Fiesta shortly afterwards.

IRC Production Cup:
Andreas Aigner has moved to the top of the IRC Production Cup standings by making it two wins from two starts in his Stohl Racing-run Subaru Impreza R4 STI. Austrian Aigner began day two leading the class but slipped behind the flying Jasper Van den Heuvel on Saturday’s dramatic opening stage where frontrunners Kris Princen and Cédric De Cecco both crashed. But when transmission failure forced Van den Heuvel into retirement on the very next stage, Aigner was left in the clear to claim an impressive victory on his Ypres debut, despite brake problems causing him considerable concern on Saturday morning. Bob Colsoul finished second having dropped out of the lead on Friday with turbo failure. Robert Consani scored points for the third time this season to keep his title hopes on course after surviving a hefty collision with a tree on the penultimate stage. Martinique’s Johan Heloïse and Ukraine’s Vitaliy Pushkar both scored points for the second event in a row. 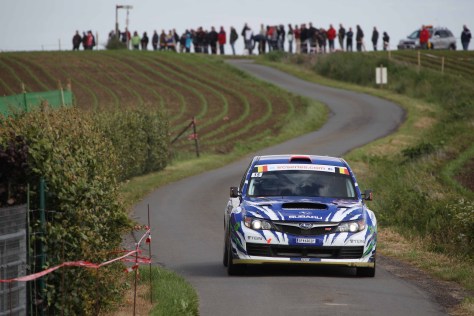 IRC 2WD Cup:
Estonian Martin Kangur overcame the challenge of a host of rivals including Mathieu Arzeno, Harry Hunt, local hero Kris Princen and Germany’s Christian Riedemann to win the IRC 2WD Cup for the first time in 2012 with Melissa Debackere second and Davy Vanneste third. Arzeno led until he inadvertently drove into a ditch following a spin on stage five. The young Frenchman fought back into contention only to crash out on stage 10. Riedemann’s hopes of winning ended when he got stuck in a ditch for several minutes on the first stage. His recovery to ninth in class, which was blighted by a puncture and brake issues, netted several stage wins. Briton Harry Hunt was heading for a podium finish only for an electrical fault to trigger his retirement 100 metres after the start of stage eight.

Roberts remembered in Ypres:
Intercontinental Rally Challenge crews paid tribute to Gareth Roberts – who lost his life co-driving for Craig Breen on Targa Florio-Rally Internazionale Di Sicilia – during the Geko Ypres Rally. Several IRC regulars held up a board with words of remembrance to Roberts at the official event photoshoot, which was followed by a period of silence. Cars carried a special tribute sticker, while a video featuring Roberts in action earlier this season was shown on the official IRC website, www.ircseries.com.