As the seventh WRC event of 2012 – significantly, also the 500th WRC event of all time – wrapped up in downtown Auckland yesterday, the Citroën team celebrated their fourth one-two finish of the season with their second crew of Finns Mikko Hirvonen and Jarmo Lehtinen finishing in second place, just 29.6 seconds behind Loeb and Elena. The two Citroën crews enjoyed an intense battle throughout the three-day event which took competitors from Raglan, west of Hamilton, to the northern city of Whangarei and back to the rally’s base in Auckland.

The Ford World Rally Team crew of Petter Solberg – who is hugely popular with Kiwi rally fans – and Chris Patterson kept fighting to end, finishing third, just over a minute behind Hirvonen.

The final day took competitors to Puhoi and Kaukapakapa north of Auckland for some high speed stages as well as two quick blasts around the narrow tarmac roads around the magnificent Auckland War Memorial Museum and Auckland Domain.

Loeb said: “It’s a great victory! It was a long weekend with some very difficult conditions. The big, big fight with Mikko for the weekend was not easy, but we are here now at the end of the rally.”

Hirvonen described the weekend as fantastic. “We had such a great fight for the first two days. It was really important to get the speed back again because in Greece I wasn’t happy with my driving so now it is good again and right before Finland which is good.”

Solberg scored two bonus points in the power stage and said: “We came here with a good car and a big opportunity but unfortunately Friday’s mistake ended our hopes of a win. That was sad for the team, but a podium is still a good result. The key today was to stay calm to secure third, and taking bonus points in the power stage was a good ending. We need some luck and make sure we’re fully prepared for the next rallies to try to secure that elusive win at last. The speed of the car is fantastic and everyone in the team is pushing hard for victory, so I’m confident it will come soon.”

Fifth went to Belgian Thierry Neuville who flew through Sunday’s stages, winning three stages outright. Neuville was making his New Zealand debut with co-driver Nicholas Gilsoul and made the most of the opportunity to drive the Qatar World Rally Team’s Citroën normally driven by Nasser Al-Attiyah. With their speed today, the French pair snatched fifth place from another crew rallying in New Zealand for the first time, Estonian pairing Ott Tänak and Kuldar Sikk in the second M-Sport Ford Fiesta RS world rally car.

After Tänak rolled in stage 17, Spaniard Dani Sordo came home sixth in the first of the Minis while fastest qualifier and early front-runner Jari-Matti Latvala finished seventh for the Ford World Rally Team. Sordo and Latvala each won two stages today – with Latvala’s power stage win proving the Finn with three bonus points. Two-time PWRC champ Armindo Araujo, from Portugal, bought another Mini home in eighth, American star Ken Block was ninth in a Ford and Austrian Manfred Stohl, in his first WRC event since 2007, was tenth in another Ford.

The honour of being the top New Zealander finishers went to Hayden Paddon and John Kennard, who also won the Super 2000 World Rally Championship by a margin of more than 33 minutes over Proton driver Per-Gunnar Andersson. The Kiwi stars experienced yet another day of frustration as broken suspension hampered their efforts in the first three stages, then a puncture slowed the pair on stage 20.

While pleased to move into the lead of the SWRC, Paddon admitted he’d hoped to achieve a lot more on his home event. “Yes, I’m pleased to have bought it home, but it was a frustrating day especially when then rear suspension broke just as we were trying to chase down Manfred Stohl. I definitely feel there’s more to come with the car as we haven’t got the setup and balance quite where we want it yet.”

It’s interesting to note that as the winner, Loeb took four hours, four minutes and 51.2 seconds to complete 413.94 km of competitive stages. Tenth-placed driver, Stohl, was only 11 minutes and 26.3 seconds slower than Loeb across the three days while Paddon, who finished 12th overall in a less powerful Super 2000-spec car, was only 15 minutes and 26.2 seconds behind Loeb while also contending with various mechanical issues on two of the three days.

Richard Mason, from Masterton, took a commendable 13th place overall and a strong win in the Brian Green Property Group New Zealand Rally Championship, powered by Brother (NZRC) field. After battling with Dunedin’s Emma Gilmour throughout the first two days, Mason was able to extend his winning margin over Gilmour on the final day largely due to Gilmour having limited brakes during the early stages. Gilmour then holed her radiator and elected to drive conservatively over the final stages to be sure of completing the rally to secure her best-ever result – 14th – in the WRC event. Christchurch’s Matt Jansen continued the solid run he’d enjoyed in the first two days to come home third in the NZRC field and 15th overall.

WRC competitors enjoy a short break before the 3 to 5 July running of Rally Finland, an event which also sees Paddon and Kennard back in competition in their Skoda Fabia S2000 car. 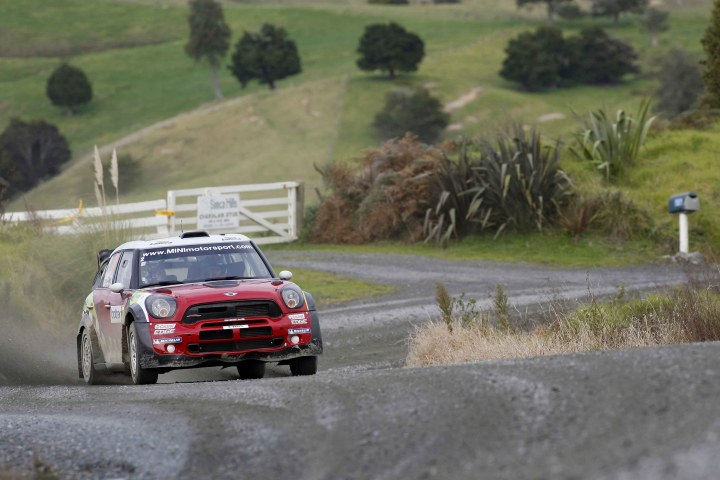