Rallying in a forest on fast gravel roads defines what rallying is for me. The Volkswagen Rally, the fourth round of the South African Rally Championship took place in the spectacular Port Elizabeth, Eastern Cape, region, with some of the very rally roads I have driven. Except this time, those roads were reduced to slippery and tricky tracks…

Thanks to Castrol – BP, GoPro, M-Sport, REACT, Ford Racing and Regent, competing in the 30th edition of the Volkswagen Rally was possible. Sitting alongside me in this muddy and wet rally was Patrick Vermaak, a co-driving veteran with a passion for the sport that burns brighter than my car’s spotlights.

The 12 scheduled stages and 181km of competitive distance for two days of action in Gamtoos, the Longmore Forest, Uitenhage and Port Elizabeth were reduced to nine stages as a result of the pouring rain. And, did it pour!

How did we do in this eventful rally? As with the ups and downs of the Longmore Forest valleys, so was our rally progress. We kept a steady and attacking rhythm throughout the nine stages to claim FIRST in Class S1600 and in the Two Wheel Drive Championship category.

With motoring journalist and passionate rally man Patrick this time out calling the pace notes alongside me in the Castrol – BP Ford Fiesta R2, the wet and cold weather spectators and my service crew had to contend with made for an exciting two days of action in the Eastern Cape.

Class S1600 and the Two Wheel Drive Championship is mighty intense with over 13 crews competing on this rally. The stages in the Gamtoos Valley, in Longmore and the super special stage in Uitenhage were slippery, and the second pass on the stages in Longmore Forest for Day Two really tested our wet weather tyres to their limits. Throttle control and steering inputs had to be precise as we slid our way over the loose rocks and muddy sections on the stages, but we had some great moments to remember. The organisers and officials reported this to be one of the wettest rallies in decades in the National series!

We didn’t experience any punctures on our first stage, as was the case on our last rally. Day One’s stages were simply fantastic fun to drive on, and all the Class S1600 crews put on a brave display of driving skill. With 48.9 seconds covering the top three at the overnight stop, the top of this Class is as tight as Patrick’s grip on his notepad all weekend in the car! We were second overall at this point, and 43.8 seconds off Morne Janse van Rensburg/Rikus Fourie (Volkswagen Polo S1600) and were 5.2 seconds ahead of Craig Trott/Robbie Coetzee (Toyota RunX S1600). That new VW Polo was being driven well by Morne on his home rally, and had fun in a great battle as we swapped Class stage wins. However, we also had to be careful of Craig in third place; he was within striking distance of us, and he will not hesitate to attack when he sniffs an opportunity.

The reigning Class champions Christoff Snyders and his sister Celeste (Volkswagen Polo S1600) unfortunately retired in Stage One with a busted gearbox. With Christoff in the mix, it would have been a massive race.

Day Two dawned early and after swimming to our cars in Parc Ferme in Uitenhage we were somewhat apprehensive of what lay before us in Longmore Forest. Organisers chopped off two stages for Day Two, the two muddiest ones we expected, but a tough day at office was to be experienced by all.

We took to the first two stages slowly, but it was not our caution that slowed it: our Castrol – BP Ford Fiesta R2’s windscreen was having problems demisting properly thanks to the cold conditions. I had to slow my speed on a few occasions to avoid making mistakes or falling off the mountains in Longmore Forest…

We were in the middle of a great race for the Class S1600 and Two Wheel Drive Championship category lead on Day One, and it continued on Day Two. It was taken to a new level as the overnight rain converted the slippery gravel stages into a slick and glassy surface. In the third stage of the day, SS9, Morne went off the road at a high-speed left corner, and became stuck on a tree stump for nearly nine minutes. Craig moved into second position, and we snuck past them to take the lead of the Class!

We held a steady advantage over Craig on the final two stages of the rally, and took Class honours by 50.1 seconds. Craig “Mr Consistency” Trott now has a cushion over the rest of Class S1600 by ten points, and we will need to outpace him to claim the Class S1600 and Two Wheel Drive Championship trophies this season.

There was a good battle developing between Guy Botterill (Toyota RunX S1600) and Tjaart Conradie (Toyota Auris S1600), who both had aspirations of closing in on Craig for second place. It was eventually Guy who clinched third place, only 8.5 seconds off of Craig and 22.3 seconds ahead of Tjaart.

Megan Verlaque (Volkswagen Polo S1600) drove her new rally car to quick stage times, but her overall position was not indicative of her pace as she had to retire from Day One with gearbox problems and restart on Day Two under SupeRally regulations. We will need to keep a close eye on Megan and Morne in their new and updated Polos…

We would like to thank the volunteers, the marshals and the officials who had to brave the cold, rain, and mud over the entire weekend. Without your time, energy and generous spirit, rallying would not be what it is today!

I will be hard at work preparing for my next event in the FIA WRC Academy in 18 days time for the Neste Oil Rally Finland. This is an event all rally drivers dream of competing on, and I still pinch myself when I think of my trip to the “home” of rallying.

Keep up-to-date with my progress on the stages by following me on Twitter at http://twitter.com/ash_haigh_smith and on Facebook at https://www.facebook.com/AshleyHaighSmith, and on my website at http://www.ashleyhaighsmith.com. 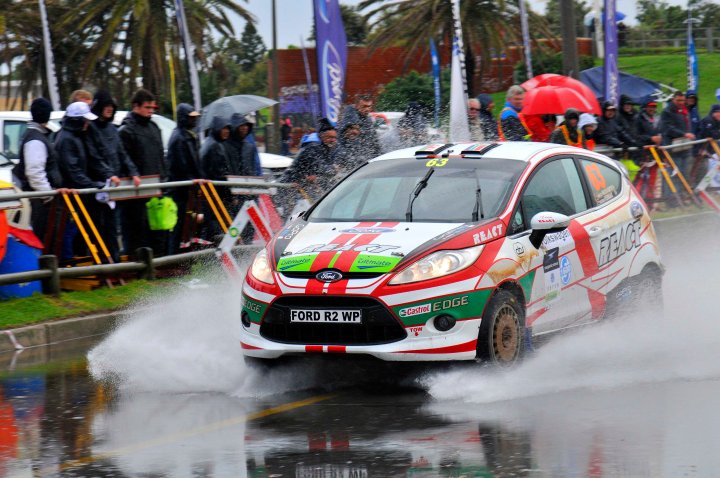