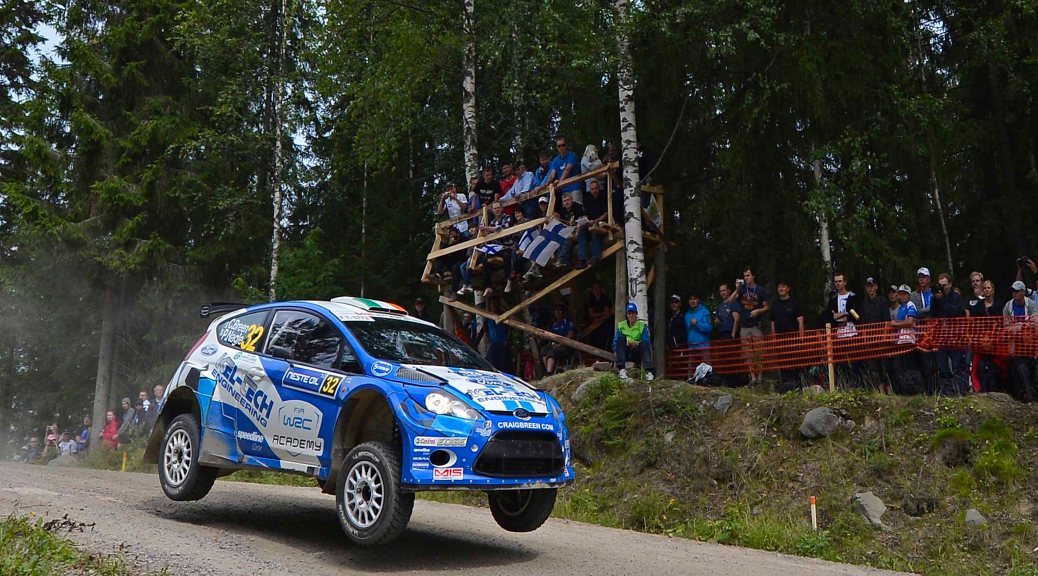 As the Olympic Games continue in London and the medals are presented for each sport, there was a gold, silver and bronze performance by rally driver Craig Breen on the World Rally Championship’s Neste Oil Rally Finland.

Breen returned to top flight rallying after the accident that claimed his friend and former co-driver Gareth Roberts in Sicily in mid-June. Breen, partnered by Paul Nagle, had a fairytale start to the event and were leading the S2000 World Rally Cup (SWRC) field going into the penultimate stage, but crashed on the first run of the famous Ouninpohja stage. A sad end to what was a great drive by Breen. Crashing out when so close to victory is not what he wanted, but the most important factor was that the two were able to walk away from the accident. His performance up to that point underlined his talent and resilience in what was the most difficult rally of his life.

After he had recovered from the shock of the accident, Breen said: “I’m very disappointed to have crashed out so close to the end. The most important thing is that Paul and I are ok. Up to that stage I was really pleased with my performance. I showed a good pace without pushing too hard. I want to thank my whole team, my family and Gareth’s family for their support during this time and special thanks to Paul [Nagle]; he has come in under unbelievable circumstances and done a brilliant job. I also want to thank everyone again for their support in the time leading up to the event. It has been amazing to see the amount of support from all over the world and to finish I congratulate PG on his win, he has had a great drive over the three days.”

After setting the fourth fastest time in the FIA SWRC there was huge emotion bubbling to the surface at the end of the opening Koukunmaa stage: “It’s a sad feeling, but I want to thank all the people who have given me the courage to get here. I never thought I’d be in a rally car again, let alone with a time that was not so far off the pace.”

Paddon was the first to hit trouble, retiring early on Day Two with an engine problem and he was followed by Lappi when his power steering failed on SS9 and then suspension damage. The Finn was able to continue under ‘Rally 2’ rules and finished in fifth place overall.

This left Breen and Andersson to battle for the SWRC victory over Friday afternoon and the six famous Saturday stages.

The lead changed hands on a stage-by-stage basis as Friday’s format was completed. In the end it was Breen who pulled out a vital 04.3 second advantgage by the penultimate Friday test and on the Killeri Super Special Stage the Ford Fiesta S2000 driver recorded a solid time to end the day with a 03.7 second lead. Breen summed up the day: “It’s incredible to be in this position. PG and I are fighting all day. First for third place and now it looks for the class win. Hayden [Paddon] had some problems and went out early on and then on that last loop Lappi dropped out. This event is so difficult: just one mistake and your rally is over. Tomorrow will be a very hard day, but to be in this position is unbelievable.”

The final day consisted of six stages, finishing with a double run of the world famous Ouninpohja stage. Breen held on to lead on the morning opener, but Andersson cut the gap to just 01.5 seconds over the stage (SS13). On SS14 (Leustu 21.94 km), he continued to push and overhauled Breen to take the lead by 01.3 seconds.

As the crews entered the day’s first service, Breen said: “We were cautious over those two, but the gap is close so we’ll see what will happen on the next loop.”

On SS15, the two were separated by only 0.1 seconds. Breen commented after the stage: “I upped it a little, but I must think of the Championship and even more long term in regards to my confidence.”

The first drama of the final day came on SS16 when Andersson broke a driveshaft and dropped 13.3 seconds behind Breen. This was the biggest gap between the two since the beginning of the rally, and the perfect comeback event looked on the cards for the Ulsterman.

In service after that stage, Paul Nagle said: “It’s been very good, we’re coming together very well. Craig has been driving exceptionally well, his courage and commitment after everything that has happened is astounding and his driving has been outstanding.”

With the event drawing to a close and only the double run of the world renowned ‘Ouninpohja’ special stage remaining, all eyes were on this sensational speed test. At 33km long it was the longest of the event and for rally drivers across the world is the “Holy Grail” of stages.

Breen and Nagle began with that 13.3-second advantage and over the early splits were neck-and-neck with Andersson. On a 90 degree left turn, Breen went wide, sideways and off the gravel road. Breen tried in vain to correct the car’s course, but from this point their Ford Fiesta was out of control as it hit the grass and began to roll. After a number of summersaults, it came to a stop on its four wheels and there was immediately relief when the driver’s door burst open and Breen jumped out. He ran around to the co-driver’s door and, as rally fans began to converge on the stricken car, Paul signalled that he was OK.

It was a sad end to a fairytale return when in pole position for SWRC victory, but after such a big accident and what had happen just six weeks ago the lost result was put quickly into perspective.

This pairing’s next scheduled event is in two weeks’ time on the Ulster International Rally where Breen will drive the new Peugeot 208 R2 as Zero Car.