The leading team in the World Rally Championship has dropped an amazing bombshell at the Paris Motor Show today, with a somewhat telling yet vague press release. With changes to the team’s sponsorship and structure for 2013 and beyond, rally fans are left to decipher the news. Fear not, we still have The Loeb Show in action on a rally stage for a few more events yet!

Here’s the press release in its unedited form:
“Citroën Racing has outlined plans for its future involvement in motorsport in an announcement at the 2012 Paris Motor Show. Thanks to the partnership agreed with Abu Dhabi, the seven-time World Championship-winning team will continue to compete in rallying, entering three Citroën DS3 WRCs in 2013. The works team will feature the Mikko Hirvonen/Jarmo Lehtinen crew for the entire season. As passionate and quick as ever, Sébastien Loeb/Daniel Elena will join them in a partial racing programme which is due to start at the Rallye Monte-Carlo.

“Having competed as a works team in the FIA World Rally Championship since 2001, Citroën Racing has amassed one of the sport’s greatest competitive records, with seven Manufacturers‘ titles and eight Drivers’ titles for Sébastien Loeb and Daniel Elena. Combined with the renewal and upgrade the Brand’s product line-up, this period has contributed to the development of Citroën’s image and the commercial success it has enjoyed throughout the world.

“In these tough economic times, Citroën has taken the view that it is essential for it to remain involved in motorsport in order to support its determined and energetic commercial approach. At the same time, it was equally important to find a way of reducing the Brand’s financial commitment to the team’s operating costs. “In this context, we are particularly proud to welcome Abu Dhabi on board,” commented Yves Matton, Citroën Racing Team Principal. “This partnership will provide us with the means of continuing our programme and entering three DS3 WRCs in 2013.”

“After eight – possibly soon to be nine – consecutive world titles, Sébastien Loeb and Daniel Elena will not be defending their title in 2013. As quick as ever, as proven by the seven wins already racked up this year, the most successful duo in the history of the WRC still love competing, despite now taking this step back. They will therefore be taking part in a partial racing programme next year, starting at the legendary Rallye Monte-Carlo, which opens the 2013 season between 15th and 20th January.

“The team will be spearheaded next year by Mikko Hirvonen and Jarmo Lehtinen, who are currently second in the WRC standings. “Mikko and Jarmo have now been totally incorporated into the team,” continued Yves Matton. “They have shown they have the level of performance and experience needed to take this final step and become the natural leaders of our outfit. We will be making another announcement in due course about the second crew that will compete in the absence of Seb and Daniel. A Citroën DS3 WRC will also be entrusted to the United Arab Emirates driver Khaleed Al-Qassimi.”

“In addition to a partial WRC season in 2013, Citroën and Sébastien Loeb continue to consider how they will work together in the future. Always on the lookout for new challenges, the Brand and its emblematic driver are weighing up the possibility of entering the FIA World Touring Car Championship (FIA WTCC) in 2014/2015. “The role of brand ambassador for Citroën cannot be a passive one for someone as driven as Sébastien. This project would give him the opportunity to pursue his career in track racing with the support of the manufacturer with which he has worked since his competitive debut. For Citroën, the WTCC would enable us to showcase Créative Technologie in major markets, such as China and Brazil,” explained Yves Matton. “The final decision regarding this programme is linked to the changes in the FIA regulations and, obviously, the determination of our current and future partners to support us in this project.”

“Before leaping ahead to this very exciting future, Citroën Racing is now going to focus on the Rallye de France-Alsace (4-7 October), round 11 of the 2012 World Rally Championship. The Citroën Total World Rally Team can secure its eighth title in Strasbourg, whilst Sébastien Loeb and Daniel Elena have a chance to take their ninth consecutive title. The only crew that can stop them from doing so is no other than Mikko Hirvonen and Jarmo Lehtinen!” 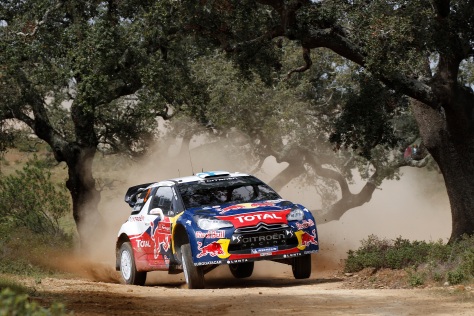