Traditionally, Christmas and the New Year is a quiet time for motor sport action, but in the Kenya Airways East African Safari Classic Rally office in Nairobi there has been a virtual tsunami of entries arriving for the next edition due this November. The entry list is now full with sixty crews having registered. This is the biggest entry that the Safari Classic has had since it was first run in 2003.

Event Director, Surinder Thatthi said : ‘This is a wonderful situation to be in. The entry list does not officially close until October 1st and we already have a full entry. It is very pleasing not only for the organising team but also for our sponsors, Kenya Airways, who have been right behind us all the way. I am sure that with an entry of this size and quality, our Safari Classic this year will be a classic rally in every sense of the word.’

The full entry list is available on the event web site at :- http://www.eastafricansafarirally.com/index.php/entry-list

Following Porsche’s breakthrough victory on the last Safari Classic in 2011 when a Porsche 911 finally won a Safari Rally after first attempting that feat in 1968, it is not surprising that there are many Porsches entered this year. Björn Waldegård, ex-World Rally Champion, four times winner of the original Safari Rally (in Ford Escorts and Toyota Celicas) and the driver of the winning Porsche in 2011, is back in a similar car to defend his title. He is joined by no fewer than thirty-one other drivers in Porsche 911s, more than half the entry. Driving one of these is another ex-World Champion, Stig Blomqvist, who is keen to add a Safari winner’s trophy to his collection. Also joining in behind the wheel of a Porsche 911 is Grégoire de Mévius, twice FIA Group N champion in 1991 and 1992, ex-Belgian rally champion and winner of the Rallye du Maroc with a Porsche 911 in 2010.

Ford Escorts have been winners of both the original Safari and its Classic offspring and they are by far and away the next most popular choice with thirteen Escorts of different specifications on the entry list. The Safari Classic is open to cars built before the end of 1978 so that among the Escorts will be found Mk1s and Mk2s some powered by twin-cam BDA engines and others by single cam Pinto engines. Datsun too have a good pedigree on the original Safari Rally with seven outright wins (with various models) while the first two Safari Classics were also won by Datsuns. But only nine of these rugged Japanese samurai have entered to do battle with the Europeans over a 4,100 mile route through the roads and mountains of Kenya and Tanzania.

One should not think that there is inadequate variety since there are a number of interesting cars entered that do not fit the ‘previous winner’ mould. Two Ford Capris are entered and one of them is the formidable vehicle prepared by the man that won the 2009 Safari Classic in a Ford Mustang V8, local champion, Ian Duncan. There is also a Chevrolet Corvette from Holland, a Mercedes 220SE from Kenya, a Ferrari 308 Dino GT4 prepared in Kenya and two locally-entered Mazda RX7s.

As to crew nationalities, there are competitors coming from Sweden, Britain, Belgium, Switzerland, Germany, Holland, Austria, Monaco, South Africa, Argentina, Mexico, Australia, USA and, of course, Kenya and Tanzania. Currently there are three crews on the reserve entry list and they will only get a chance to run if someone ahead of them drops out. 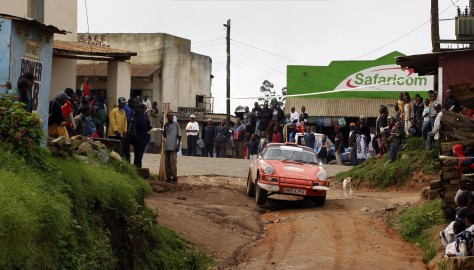