It would have been a very different leader board this evening, had a certain Frenchman still been in competition. The early demise of Sebastien Ogier and his Volkswagen Polo R WRC (due to a broken front left suspension after driving up a pavement and slope-side) saw the face of the rally turn with the snapping his car parts. Not entirely gifted, team-mate Jari-Matti Latvala has worked every inch of the day’s six stages to keep the Volkswagen flag flying at the top of the leader board of the WRC ADAC Rallye Deutschland.

Overnight leader Ogier simply went too hot into a turn, in damp conditions and cold tyres, and smacked his car’s left front corner. He limped out of the stage, and attempted a repair between SS3 and SS4. It didn’t last long as he called it quits early in SS4. The damage was not as severe as was initially perceived, as his VW service had retrieved, repaired and prepped his car for Super Rally (Rally2) action on Day Three by the mid-day service session.

Qatar M-Sport World Rally Team’s Thierry Neuville, sensational in WRC Neste Oil Rally Finland, has bested his own best performance in the WRC to date by keeping Latvala honest on the six stages today. The Belgian claimed four of the six fastest stage times, with Latvala clinching the final two of this evening’s three-stage loop. Latvala holds a slender 7.3sec advantage over Neuville, and it was a thrilling battle that will see both crews seeking every opportunity to gain a tenth of a second on Day Three’s 153.70km of stage kilometres.

Latvala found a space for himself to remain calm on the final two stages on Day Two, and this was enough to stop the Belgian leapfrogging him. It is not the first time Latvala has lead an event in 2013, but it is his first true chance to shine for the Volkswagen Motorsport squad, and at their home event on his least favourable surface too. This is as much a test of his speed as his psychological strength.

Behind the squabbling two leaders, Dani Sordo is patiently sitting in third place. A puncture, an overshoot or worse, will see the Citroën Abu Dhabi World Rally Team driver promoted to the top. This is his favoured surface, but WRC ADAC Rallye Deutschland is not a pure asphalt rally. Sordo has a cushion of 21.3sec over team-mate Mikko Hirvonen, who in turn is 01min 24.7sec ahead of Mads Ostberg (Qatar M-Sport World Rally Team), so the Spaniard needs to maintain his concentration.

What of Citroën and M-Sport’s lead drivers? Beset with setup problems and mechanical niggles, they’ve been upstaged for by their junior team-mates once more in 2013. Hirvonen is still in with a chance at a podium position, but for the Norwegian he will need to reel in over 2min to catch his Fiesta RS WRC team-mate and the Volkswagen Polo R WRC event leader.

Tyre choice was vital for Day Two’s stages, with optimal traction found on the harder compound rubber tyres. Damp and slightly wet in places, the stages offered ever-changing levels of grip – more so than gravel stages.

It was yet another WRC2 thriller, with Robert Kubica (Citroën DS3 RRC) losing time to a hard-charging Elfyn Evans (Ford Fiesta R5). These two drivers dominated the Class, leaving Sepp Wiegand (Skoda Fabia S2000) and Hayden Paddon (Skoda Fabia S2000) to fight for the final podium position. The S2000 cars are no match for the new-generation R5 and RRC cars, but Wiegand and Paddon are equally matched and only 3.7sec separates them. That said, Paddon set the pace in the opening loop of stages for the Class but Kubica eclipsed his times on the evening loop.

Kubica and Evans have been throwing their all into the stages, with the former F1 star using all his asphalt skills to keep the Welshman behind. Who will feature on Day Three is anyone’s guess with these WRC2 runners, and rally fans are in for another fantastic day of all-out rallying.

Jose Suarez dropped from an overnight first place in the Junior WRC to sixth place and over 04min off the new Junior WRC leader Pontus Tidemand. The roads become dirty as the cars pull sand and stones onto the asphalt when cutting the corners. For the two-wheel drive crews, this slows them considerably. Experience is needed to drive around these problems, and Suarez’s first foray on asphalt is an admirable one. Tidemand has the bit firmly between his teeth as he seeks to gain more Championship points: he currently leads the Class by 02m 24.0sec. Michael Burri is second with Marius Aasen third.

Day Three comprises of six stages, with two loops of three speed tests. It includes the spectacular Arena Panzerplatte in its full 41.08km of rallying awesomeness. The first stage, SS9 starts at 08h03 and the final stages of Day Three concludes at 17h10. Then, Day Four’s two stages will see who will be crowned the winner. 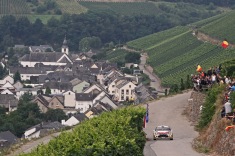 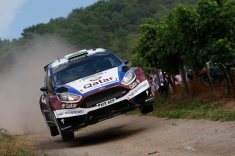 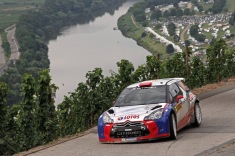 One thought on “Latvala tops the timesheets in Germany”