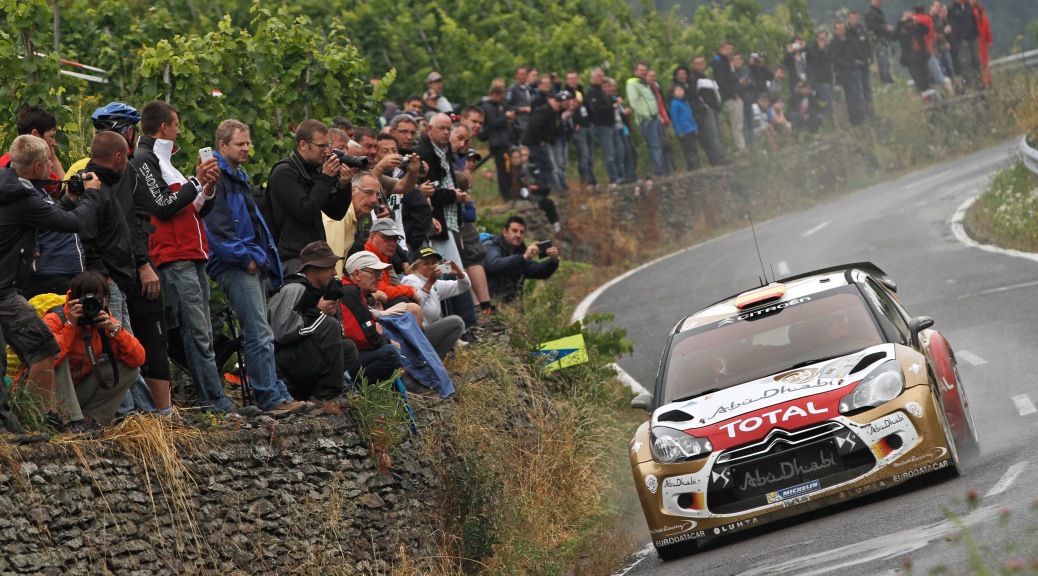 The WRC ADAC Rallye Deutschland was all that WRC means to its loyal and passionate competitors and fans. Starting with a 0.8sec deficit between the two protagonists at for Day Four’s two stages, and with two manufacturers and two teams and two drivers fighting for their first WRC victories, the 49km of cmpetition were bound to be as tense as imagined.

Thierry Neuville (Qatar M-Sport World Rally Team) was a mere 0.8sec adrift of Dani Sordo (Citroën Abu Dhabi World Rally Team) at the beginning of Dhrontal 1, but by the end of the special stage Sordo had managed to stretch the gap to 03sec.

A two-hour Service Park session was used to best effect to prep and prime the Citroën DS3 WRC and Ford Fiesta RS WRC for the final 24km Power Stage. From an electric atmosphere, the WRC crews rolled out for the repeat stage in reverse order. This meant that, seeing as Sebastien Ogier (Volkswagen Motorsport) was last on the WRC leader board due to his running under Rally2 rules, he was first to run with Sordo the final car to take to the stage. Neuville, the hunter on the previous stage, became the hunted for Sordo…

Ogier set the fastest time through the Power Stage to collect the bonus three Championship points. But, all eyes were focused on the Neuville versus Sordo battle reaching its climax. And, Neuville sprinted through the stage and went too hot into a corner and went off the road. It was inevitable: the pace at the front was too fast. Sordo maintained his confident pace and held on to claim his first WRC victory in his ten-year career!

Neuville’s off cost him some 50seconds, but his lead over Mikko Hirvonen (Citroën Abu Dhabi World Rally Team) meant he was still comfortable in second.

It was in the final time split section of the final stage that the WRC ADAC Rallye Deutschland was decided, and it was a do-or-die push from Neuville. A brave effort from the youngster, and a result he and his team will be celebrating his third runner-up placing in succession.

Sordo charged to the finish line with a helmet-filling smile and surely a rush of Spanish superlatives to co-driver Carlos del Barrio. It was a concerted and calculated drive from the Spaniard, driving for his WRC future. He didn’t push form the outset, and he and team-mate Hirvonen slowly picked off their rivals one by one over the course of the event’s 15 stages.

Hirvonen had a quiet drive to third, not sticking his neck out on any of the stages but rather feeling his way through the speed tests. This proved to be to his favour, although he was quite off the leaders pace. He would have been out of the top five we fell, should Ogier, Jari-Matti Latvala (Volkswagen Motorsport) and Mads Ostberg (Qatar M-Sport World Rally Team) would have been ahead of him. That is a BIG what if as he DID claim third position overall.

The WRC2 Class battle was as thrilling as that for the overall rally victory. Robert Kubica (Citroën DS3 RRC) and Elfyn Evans (Ford Fiesta R5) once more crossed swords on the final two stages, and after changing position twice yesterday it was Kubica who managed to hold onto a 12.9sec advantage over the hard-charging Welshman. Evans has once more put his hand up as a future major player in the WRC.

Hayden Paddon (Skoda Fabia S2000) impressed as the fastest of the ‘conventional S2000’ cars, blowing his S2000 rivals away with this pace. He finished third in WRC2, but his problems earlier in the weekend meant he was to settle with a gap to the leaders of nearly 03min.

Sebastien Chardonnet was the Top Citroën Driver in Germany, but was kept honest by Irishman Keith Cronin. On Day Four, it was a somewhat processional drive to the finish: Cronin was nearly 02min 50sec off Chardonnet after a lateness penalty, but he sliced that lead down by 30sec on the final two stages. He finished 02m 24sec off a smiling Chardonnet and his manager nine-times WRC Co-Driver Champion Daniel Elena.

The WRC now moves to the southern hemisphere for the Coates Hire Rally Australia on 12 – 15 September.