Australian rally driver Molly Taylor will contest Rally Poland next week, the ninth round of the European Rally Championship, rather than Rally Australia as she had originally planned.

The decision was made by her management team, United Business, to strengthen her position now she is leading the inaugural European Ladies’ Trophy, as well as to increase her experience on a wide range of European events.

In their most recent event, Barum Rally Zlin in the Czech Republic (30 August – 1 September), the young Sydneysider and her British co-driver Seb Marshall were safely in front of the other female crews, a result they reached at the end of a fast but cautious performance with a clear eye on the championship standings.

Now their attention turns to the challenging Rally Poland, now in its 70th year. It’s a gravel event held in Mikolajki, a town in the lake district of north-eastern Poland, from September 13-15. Taylor and Marshall will tackle the event in the Citroën DS3 R3, the car with which they have already contested five rounds of the 2013 European Championship.

“I’m happy to be able to race in Poland because it is an opportunity to increase my experience and because I hear the rally is really fascinating. I’ll have some challenging opponents and I hear the local rally fans make every moment of the event very special,” Molly says. “On the other hand, obviously I am so sorry not to be in Rally Australia. It is my home event and in my heart I really wanted to be there, but after discussing it carefully with Seb and my manager Pier Liberali we decided to give up Australia and to be in Poland. The goals we have for the European Rally Championship and the chance to win the inaugural Ladies Trophy have to come before sentiment. Again, we are facing a completely new rally. That doesn’t scare me. As usual, Seb and I will try to give it our best.”

Taylor’s manager, Pier Liberali, says while he realised how much competing in Australia meant to the young driver, he had been thinking about the program change for some time. “When I explained my reasons to Molly and Seb, their great professionalism meant they understood and shared them. I had no doubt they would because they are proving to be two great professionals. Having done less rallies than her opponents and also because of two unlucky events, until now I had to ask Molly to limit her desire to go flat out. Looking at our hopes of winning the Trophy, it was essential to be at the finish of the races. She’s done that three times now and has always beaten her rivals with relative ease. Now that leadership in the Ladies Trophy has been reached, I think it is fair that our crew has the go-ahead in Rally Poland to fulfill their desire to attack. Both in Sibiu (Romania) and in Zlin I saw Molly and Seb’s frustration. It is never nice to ask a driver to go slowly and finish the race, but I had to do so and with great professionalism they listened to my recommendations. In Poland they will run as they deem it best and I am hopeful that this year’s races have taught them to manage a rally. I always say that to win trophies and championships you have to get to the end of each rally.”

Four of the special stages in Rally Poland will be shown live on Eurosport. They will be the two runs through the 19.14km Mragowo stage and the two on the 23.77km Mateuszek stage, which will also be the closing stage of the event. Australian fans with access to Eurosport should check the program for the weekend of the event. 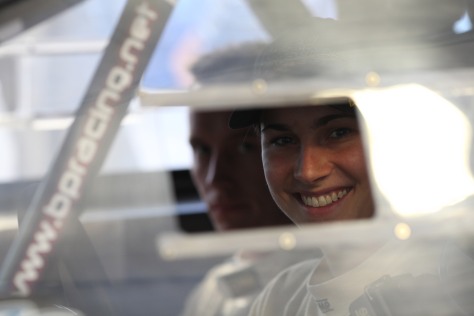 Taylor, now 25, moved to Italy early this year in order to work more effectively with United Business and BP Racing, which runs her car.

She and Marshall signed with United Business last year to contest four events including rounds of the Intercontinental Rally Championship and the World Rally Championship. That gave them valuable experience and exposure at a level above what they achieved in 2011 when they won a scholarship to compete in the WRC Academy development series.