Esapekka Lappi starts the final leg of Rallye International du Valais today with a clear lead on the FIA European Rally Championship season-closer. However, with the longest day of the Swiss event remaining, Lappi’s second ERC victory is far from guaranteed.

Although Lappi insisted building his experience on asphalt was his main target rather than pushing for victory, the 22-year-old produced two sensational stage bests yesterday in his Michelin-shod Fabia to open up a healthy advantage starting today’s mixed-surface route, which covers a competitive distance of 146.3km.

“It’s been a good day with no problems at all,” said Lappi, who is competing in Switzerland less than a week after winning a rally in China. “The grip was much better in the afternoon loop and I got more confident with the corrected pacenotes so I could improve the speed. It’s the toughest day [today] and if we can win this race then it will be okay. But if the conditions are difficult we will back off and come to the finish.”

Despite losing the overall lead to Lappi, Aigner was highly satisfied with his performance in his Yokohama-equipped Impreza. “The times were fantastic in the morning. Okay we lost some time in the afternoon to Esapekka but I expected it. It’s a long day [today] and one mistake from him I will be there. [Today] is easier than [yesterday] for us with the gravel but it will be long and tough.”

Olivier Burri, the eight-time Valais winner, remains the top Swiss driver in third overall in a Ford Fiesta RRC with Vasily Gryazin fourth following another impressive performance from the Russian teenager in a Fiesta S2000. Nicolas Althaus is fifth with Jérémi Ancian climbing from 28th at the start of Day Two to sixth at the completion of yesterday’s final stage in Sion.

Ancian has been playing catch up throughout the day yesterday after he was saddled with a three-minute time penalty for an early check-in prior to Thursday’s final stage. Such has been his determination to make up lost time that he was quickest on four stages yesterday in his Peugeot 207 S2000.

Peugeot Rally Academy team-mate Craig Breen had targeted a similar rise up the order having incurred a time penalty of two minutes on Day One. However, a knock on Friday’s first stage damaged his car’s powersteering and he was unable to prevent a significant time loss. The Irishman is eighth overnight.

Jaroslav Orsák is seventh on his return to ERC duty from injury. The Czech completed leg two by going fastest outright on the Sion spectator special at the wheel of the GPD Mit Metal Racing Team Fabia S2000 he’s using in competition for the first time in three seasons.

But while Orsák has enjoyed a strong second day on his Valais debut, team-mate and event regular Antonín Tlusťák retired with a broken exhaust at the start of the afternoon loop. Seven-time Swiss champion Grégoire Hotz is also out after his Peugeot Switzerland-backed 207 stopped on the road section heading to stage nine.

In the ERC Production Car Cup category, Swiss Subaru driver Florian Gonon is second behind runaway leader Aigner with young French driver Romain Salinas third on his ERC debut in a Renault Mégane RS N4. Robert Consani had been in third for Team Renault Sport Technologies only to retire on Friday’s first run with stud failure on his Mégane’s front-left wheel.

Sylvain Michel, in a Citroën DS3 R3T, reclaimed the ERC 2WD Championship category lead from Laurent Reuche on Les Casernes stage after the Renault Clio R3 driver had led for much of the afternoon. Mike Coppens is third with Stéphane Lefebvre a strong fourth in his R2-specification Peugeot 208. Ekaterina Stratieva leads the FIA ERC Ladies’ Trophy.

Leg three today consists of eight stages over a competitive distance of 146.30km, including more than 35km on gravel. The opening stage, Champex, measures 9.53km in length and goes live at 09:40hrs local time. The finish is scheduled for 16:30hrs at the CERM exhibition centre in Martigny. 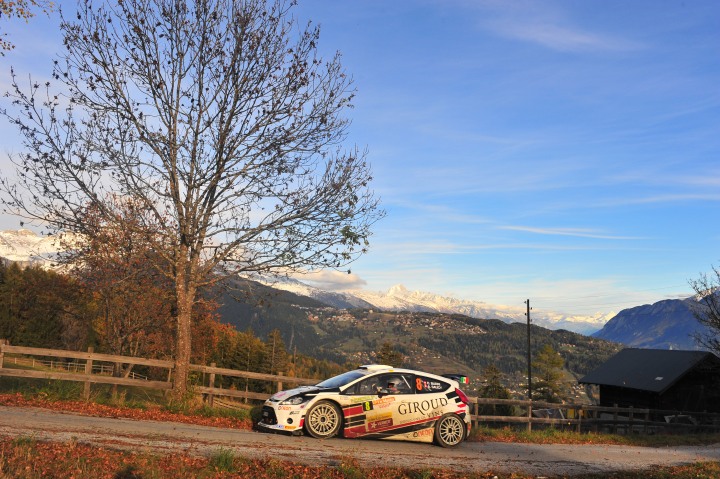