It was a close 02min 10.5sec finish for Higgins/Drew over Rockstar Energy Drink Rally Team’s Antoine L’Estage and co-driver Marshal Clarke, considering that getting stuck in a snowbank could change a team’s fortune instantly.

L’Estage led Sno*Drift early on the first day, even having a punctured tyre on SS5. Meanwhile, Higgins dealt with overheating issues of his own and lost valuable time when his hood popped open and obscured their view through an entire stage. After the first service Higgins bypassed L’Estage for the event lead and never relinquished it. L’Estage kept within striking distance throughout Day Two in case the Subaru drivers made a mistake, but settled for second place overall.

“Last year Antoine hurt us really bad when he beat us on the last stage at Sno*Drift,” said Higgins. “These difficult conditions can change so quickly and you never know what you are going to get. That just makes me pleased to set the year off and get the points in the bag. Now I am looking forward to getting on the gravel at the Rally in the 100 Acre Wood.”

Super Production’s Lauchlin O’Sullivan and co-driver Scott Putnam took the Class win and finished an impressive third overall. The class victory returns the 2012 Super Production champs to their former glory after a disappointing 2013 rally season that resulted in missed events and poor performance.

“It’s great to make a comeback after such a difficult 2013 season,” said O’Sullivan. “To come out and get this was a work in discipline, especially when there are four up-and-coming SP drivers to compete against. I had to drive in these icy conditions not too fast or too slow. I just had to keep doing my thing and not worry about what the others are doing. I just avoided that one ‘gotcha’ that could end it.”

Dillon Van Way and Andrew Edwards finished in second place for their third consecutive podium stemming from last year since moving into Super Production from the Two-Wheel Drive (2WD) category. 2013 Rookie of the Year, Nick Roberts, with co-driver Rhianon Gelsomino rounded out the podium for third place.

In 2WD, Scion Racing Rally xD’s new driver, Matthew Johnson, paired with co-driver Jeremy Wimpey took his first victory after spending four seasons away from the sport. Johnson was expecting a challenge from Ford Racing’s Andrew Comrie-Picard, but the anticipated battle never materialized following Comrie-Picard losing 35min from getting stuck in a snowbank. “I’m really happy with this result,” commented Johnson. “I’ve been mentally preparing myself to get back in the driver seat for a couple of years and I’m really fortunate to have this opportunity by Scion Racing. They prepared a great car with a special engine for Sno*Drift, and it really paid off for the team. I couldn’t be more excited for the rest of this year!”

Comrie-Picard’s misfortune helped move brothers Troy and Jeremy Miller into second place for their first ever national podium. Troy Miller is in the hunt for the 2014 Rookie of the Year. Honda Performance Development’s James Robinson and Jordan Guitar took third for their second 2WD category podium and also took the B-SPEC Class victory in the process. Robinson is the reigning 2013 B-SPEC Champion and he took an important first step in defending his title.

The second round of the Rally America National Championship takes place 21 – 22 February at the Rally in the 100 Acre Wood in Salem, Missouri. Subaru Rally Team USA will welcome back action sports star, Travis Pastrana, at the 100 Acre Wood Rally, which will certainly elevate the competition with his entry. 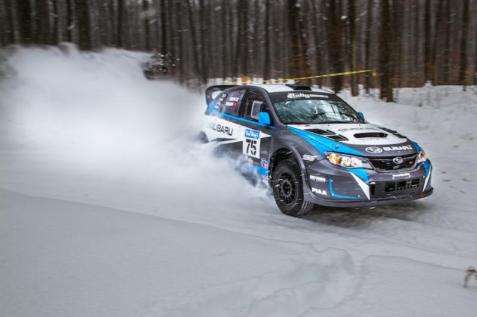 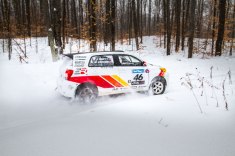