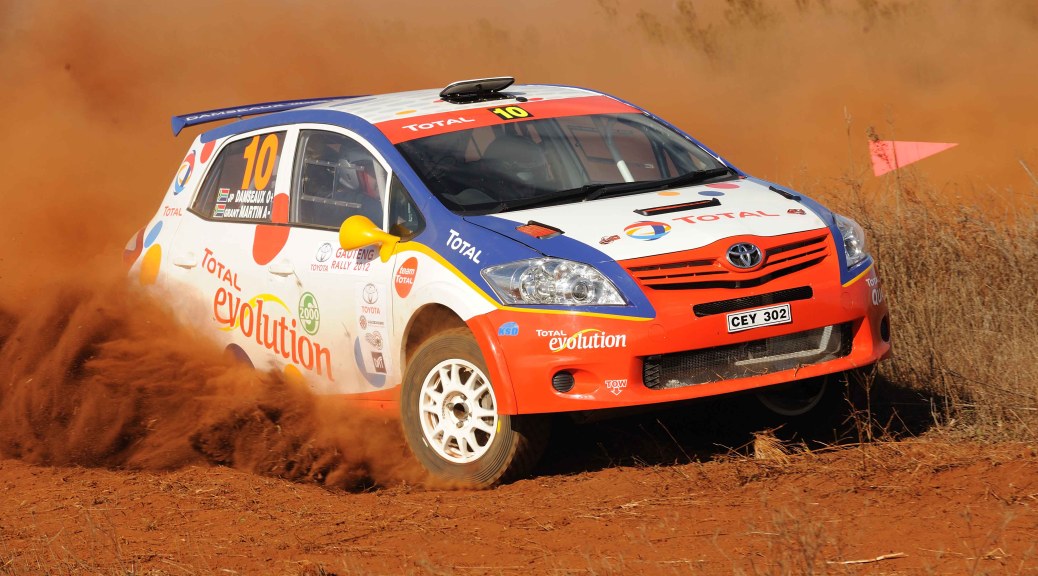 The Challenge:
Ten stages over 186km of competitive action saw the 37 entrants to the Toyota Gauteng Dealer Rally whittle the field down to 24 survivors.

Team Total tackled Round Three of the South African Rally Championship held in the Bapsfontein and Pretoria West areas on Saturday 9 June and Sunday 10 June. The very first speed test of the event proved decisive in the outcome of the final results on Sunday afternoon, as a rocky section on this gravel stage saw a number of crews succumb to ill-fated punctures and dreaded suspension component damage. The current Championship points’ leader Mark Cronje (Ford Fiesta S2000) was sidelined on this stage after hitting a hole that forced their car into retirement. Second in the Championship’s standings, Johnny Gemmell (Toyota Auris S2000) suffered a string of punctures in that stage too to leave the expected leader board upside down. END_OF_DOCUMENT_TOKEN_TO_BE_REPLACED

After a lay-off of nearly five months, rally crews took to the first round of the South African Rally Championship this past weekend to tackle the 14 testing stages of the Total Tour Natal Rally. This year’s edition saw a healthy entry list of 39 cars take to the start ramp, but the trying speed tests of Scottburgh, Pennington and Amanzimtoti on the South Coast saw the number of finishers total only 23.

With sweaty palms and big grins the Total Tour Natal Rally started on Friday afternoon, taking in five stages (four gravel and one tarmac) to then continue on Saturday with a further eight gravel tests and a final tarmac Super Special Stage to conclude the event. The usual teething issues for the new cars and teams saw frantic action ahead of the event, but once the balaclava, helmets and gloves were donned, the crews doggedly chased after the final finish time control on Saturday evening. With the route providing its share of upsets on the leader board, mechanical problems slowing cars and driver errors costing valuable stage time, each new stage was, however, met with the same determination and commitment. END_OF_DOCUMENT_TOKEN_TO_BE_REPLACED

What would one call a “dominant” performance in a rally? A leader charging off into the sunset is one such way, another would be when a team romps home with a one-two result and yet another could be when a rally car, in the hands of drivers of different driving styles and approaches, claim a number of stage wins. In fact, ten out of a possible 14.

The Ford Fiesta S2000 landed on South African shores last year for this very same event, claimed its first win here with Conrad Rautenbach (G-Fuel Ford Fiesta S2000) on his first outing in the car in 2010 at Caledon, Western Cape and he has brought more silverware to the Blue Oval with a win in the KwaZulu-Natal rally this past weekend. Rautenbach also claimed the inaugural Privateers Championship in 2010 after a string of strong results last season. END_OF_DOCUMENT_TOKEN_TO_BE_REPLACED

Gavin Cronje’s baptism in the Sasol National Rally Championship continues to be a frustrating affair, but the talented and versatile motor sportsman refuses to let the cold water dampen his enthusiasm. END_OF_DOCUMENT_TOKEN_TO_BE_REPLACED